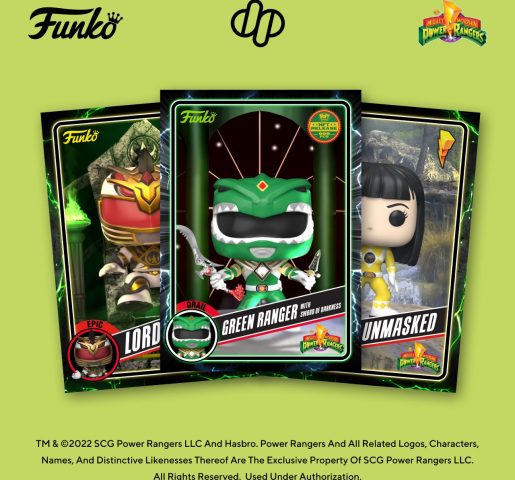 The Power Rangers American superheroic series is undoubtedly an epochal cult, which has formed an extensive fan base since its launch in the mid-90s. Currently, the Mighty Morphin Power Rangers are coming to web3 in partnership with Funko Pop! and NFT marketplace Droppp.

A limited-edition NFT collection titled The Power Rangers Digital Pop! featuring all the most loved characters from the series will be released on August 23rd. The NFTs will be dropping in blind packs: Standard pack with five cards at $9.99 and Premium pack with 15 cards inside at $29.99.

The whole supply will be limited to 22,500 pcs., with one of six rare Digital Pops! in each pack. Moreover, the NFT collection is split into different rarity tiers, including Common, Uncommon, Rare, Epic, Legendary, Grail, 1 of 1, and Series.

Take hold of any Digital Pop! of the Legendary or Grail rarities and become eligible to redeem for a rare, exclusive physical collectible, matching your card. Besides, owners of the Royalty Collection, which contains a Common, Uncommon, Rare, and Epic NFT, can redeem it for one physical collectible figure designed exclusively for this drop, as follows:

The lucky holders of Legendary, Grail, or Royalty NFTs will deposit redemption tokens into their wallets starting from December 21st up to January 20th. As for the physical Funko Pop! figurines, they will be shipped to all owners in Summer 2023.

Mark your calendars! The Mighty Morphin Power Rangers are coming!